Our favourite tips for vertical video

Have you spotted the vertical video trend in your social media news feeds (and on certain websites)?

It shouldn’t come as any surprise that vertical video production and distribution has increased; it’s the way most of us hold our phones, after all.

But what is vertical video, exactly, and how can it benefit business marketing strategies and content creators?

Welcome to our favourite vertical video tips for beginners and the more experienced content creators alike.

This guide will also be of use to anyone who wants to get into (or expand their knowledge of) social media marketing.

What is vertical video?

If you pick up your phone and start using it right now, how will you hold it?

Chances are, you’ll allow it to rest in your palm vertically.

In fact, can you think of the last time you turned your phone sideways to use it or consume media in landscape format? If you did, it was probably a bit of a pain to do so and only because you couldn’t quite see the width of a badly-designed web page.

Vertical video takes advantage of the most common way we all hold our smartphones. It’s tall, fills the screen and features in most of the homegrown photos and videos we shoot ourselves.

The history of vertical video

The 1.375:1 Academy ratio was introduced in 1932, and since then, horizontal video has been standard practice for TV and film.

Fast-forward several decades and the birth of the smartphone introduced a rather different format in which we could shoot and consume video.

Due to the fact smartphones are typically held vertically, users rapidly began filming videos in that format.

This caused something of an issue for broadcasters, who would have two ugly black borders to contend with if they ever displayed user-generated content shot in vertical format.

On phones, however, the format made perfect sense, because it fitted the screen orientation perfectly and was therefore a pleasure to consume.

The platform which propelled vertical video into superstardom is hotly contested, but it’s hard to deny Snapchat’s role. When it first introduced video support in 2012, 9:16 was the aspect ratio of choice.

In 2015, Snapchat convinced advertisers to begin producing vertical videos with a maximum runtime of 10 seconds.

And this is where the real vertical video journey begins. The idea of combining the ratio with short-form content was a stroke of genius and perfect for users. 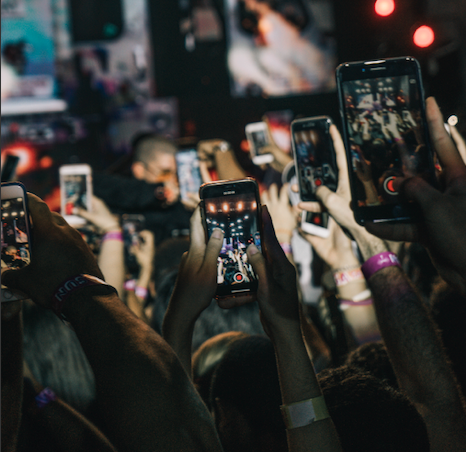 Platforms that use video as a default format

We’ve come a long way since the early vertical video days of Snapchat. You can now upload vertical video to most platforms, but there’s still only a handful that use it as their default format.

Here’s the three most important.

As we’ve previously noted, Snapchat is largely credited with pushing the benefits of vertical video for modern audiences, and that’s still in evidence today.

Funnily enough, you can’t even record video properly in anything but vertical format on Snapchat. Flip your phone on its side, and none of the on-screen controls adjust.

If you have vertical video syndrome, Snapchat is the perfect platform on which to express yourself.

Unlike Snapchat, Instagram is a little more forgiving for traditionalist video makers.

Videos can be square or horizontal and even IGTV now supports landscape shooting, as detailed in this post.

If you’re an avid watcher of stories, you’ve probably also noticed the prevalence of vertical video for Insta stories – again, because it’s the default format.

However, if you’re an Instagram user, you probably never turn your phone that way while using the app, which is why vertical video for IGTV and standard Instagram posts still reigns king.

Forget vertical video for Instagram – TikTok is now apparently where all the cool kids can be found.

You may not know it, but TikTok was actually the most downloaded app during the first quarter of 2018.

Enabling users to create short, engaging videos that can be synchronised to music, TikTok has captured the imagination of people across the world.

And, you guessed it, vertical video is the format of choice for this burgeoning, exciting new network.

Check out this brilliant guide to TikTok.

Can I upload vertical video to YouTube, you ask?

There is a caveat, though, and it’s one of the best vertical video tips you’ll read in this post.

Even though YouTube now allows vertical videos and has even implemented some clever features to make it look as good as possible, it’s still seen as somewhat unacceptable for serious video creators.

For amateur content creators and personal blogging, it works brilliantly, but if you want to become a successful YouTuber, you need to revert to standard widescreen.

Why rely solely on the built-in camera app on your iPhone when you can use something as comprehensive and easy-to-use as Spark Camera?

It lets you capture, import, add filters and edit your vertical video directly from the app, and the results are awesome.

Most vertical video tips blogs will mention Filmic Pro at some stage.

This is for good reason; it can be as simple as Spark Camera yet as in-depth as a feature-packed DSLR and video editing suite, thanks to functionality such as colour grading, LOG recording and support for a huge range of accessories.

Few people need a guide on how to film vertical video, because it comes so naturally to most of us. However, we hope our tips above have helped illustrate why it’s increasingly popular among current generations.

If you’re yet to use this type of video, take our vertical video tips with you into your next marketing meeting and get creative.

Need some more inspiration? There are some great vertical video tips in this video.