Why marketers shouldn’t ignore TikTok in 2019

What is Tik Tok?

TikTok (also known as Douyin in China) is a social media app which enables users to create and share music videos of 3 to 15 seconds duration, and short looping videos of 3 to 60 seconds. Formerly known as musical.ly, the TikTok app has fast become the leading world player for short-form mobile videos.

TikTok states that its mission is: “to capture and present the world’s creativity, knowledge, and moments that matter in everyday life … empower(ing) everyone to be a creator directly from their smartphones.” Their aim is to build a social network community in which users can safely and easily share their passion and creative expression through their videos.

TikTok has operating bases in nine countries, including the UK, China, the US, Japan, India, Indonesia, Korea, Singapore and Russia. In 2018, TikTok was the sixth most downloaded iOS and Android app in the world.

TikTok is available on mobile devices only. Short, snappy videos created by users are usually light-hearted in tone, and most often focus on content such as lip syncing to well-known songs and performing skits, comedic pranks, challenges and stunts. Other popular content includes food, pets and life-hacks.

Video clips can include music and sound effects, and the app also features advanced editing techniques and visual effects to enhance videos and make them more engaging.  As well as being able to edit video, users can also make use of the Go Live feature to stream short-form content to their followers.

As of November 2018, Tik Tok had around 3.7 million monthly active users in the UK. Users spend an average of 52 minutes a day in the app, collectively generating around 5bn monthly video views. Other key statistics similarly demonstrate the impact and accelerated growth of the app, indicating a clear trend of further rapid expansion for the foreseeable future.

Tik Tok is particularly popular with young millennial Generation Z teens. There are signs that older audiences are also beginning to take notice and engage. However, using Tik Tok for marketing is likely to work best for businesses with a target audience below the age of 25.

Consumers continue to indicate that their preferred way of being reached by brands is via video content. This is great news for the Tik Tok platform which is opening up significant new marketing opportunities for a variety of brands, particularly those who are specifically targeting Gen Z and music-loving young millennials.

There are two ways brands can use Tik Tok for marketing campaigns – by creating original video content, or by partnering with established influencers on the platform.

Creating original video content on Tik Tok can be a powerful marketing strategy for brands who have the time and resources to invest. The key to success is to create light-hearted, brand-related content that has the potential to go viral, and this will require some creative thinking.

For example, if you are a beauty products retailer, you could demonstrate a quick and easy beauty tip with a lyrically-relevant pop song playing in the background, and show off one of your beauty products in the process.

Try to incorporate humour as well as music into your video content, and consider launching hashtag challenges that encourage and stimulate lots of user generated content.

As demonstrated by YouTube, influencer marketing is a great way to increase brand awareness and push promotions. Collaboration is key to Tik Tok’s success and, just like YouTube, the platform is a very effective channel for finding influential content creators and brand ambassadors.

To date, successful brand partnerships on Tik Tok have all involved verified content creators with a large number of highly engaged fans. These are known as “Crowned” users, and there are a growing number of huge Tik Tok influencers (some already have millions of subscribers), particularly within niches such as baking, make-up and crafts.

Partnering with Crowned influencers in your niche will ensure that your content is seen by audiences that will want to buy your products. Brands pay these influencers to use or otherwise promote their products on-camera to their adoring fans.

Surveys have shown that one in three consumers trust an influencer’s opinion more than communications from brands themselves. By associating themselves with powerful influencers, brands can earn trust from their audiences.

For brand/influencer partnerships to be successful, it is important that creators are given the creative freedom to post content that is natural and authentic on their channels, while still producing the agreed objectives for the campaign. Successful campaigns tend to feature fun pieces of content that users can easily interact with.

If your business is a smaller scale local enterprise, then you may be interested to learn that Tik Tok strongly encourages localised content and often runs local challenges and contests. It also picks up on local trends, making use of local trending hashtags to suggest topics for content creation to users.

It is still early days as far as paid advertising is concerned. The company has been testing and integrating in-app ads since 2018, but none of the monetisation schemes tested have been rolled out more widely as yet.

Currently, the only visible ads we found appeared only occasionally when opening up the app, and these give the option to skip in the top right corner (huge brands such as Nike tend to appear here).  Unlike the ad plastering techniques used by some other social media platforms such as Facebook, ads appear only every now and then, and consequently you might see just one ad over a whole day’s interaction with the TikTok app. 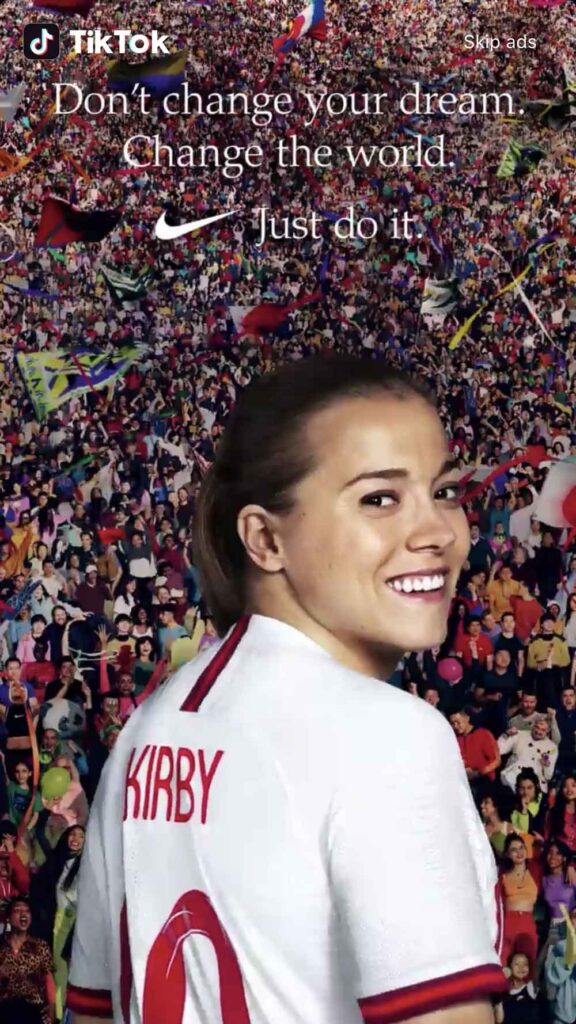 According to Digiday, the four ad units currently being tested in the US and the UK include brand takeovers, in-feed native videos, branded hashtag challenges, and branded Snapchat-style lenses. TikTok is also apparently working on a biddable advertising option for the platform.

TikTok’s major challenge with advertising will be allaying fears and concerns about privacy and security, given its young audience. Strict regulations around marketing to children are bound to present challenges for the platform, and it is yet to be seen how these will be addressed. Brands and agencies will need to be confident that such issues have been overcome before committing to any significant spend on advertising.

For the majority of small businesses then, paid ads on Tik Tok are not a viable option at this stage. This is probably a good thing, since businesses can – for now, at least – enjoy the social media marketing benefits of organic growth no longer possible on platforms like Facebook.

Which brands are using TikTok?

For example, in 2018 Guess ran a campaign called #InMyDenim, where they invited Tik Tok users to create video content of themselves dancing and acting whilst wearing denim. The videos were then shared using the hashtag. More than 33 million viewed videos were associated with the tag, marking the beginning of a successful brand partnership between Guess and Tik Tok.

Coke invited content creators to perform duets whilst sharing a can of Coke. Song lyrics chosen by influencers were printed on Coke cans, and their fans were challenged to incorporate the lyrics into their videos. The campaign was launched with crowned users and generated more than 900,000 video responses from the target group. 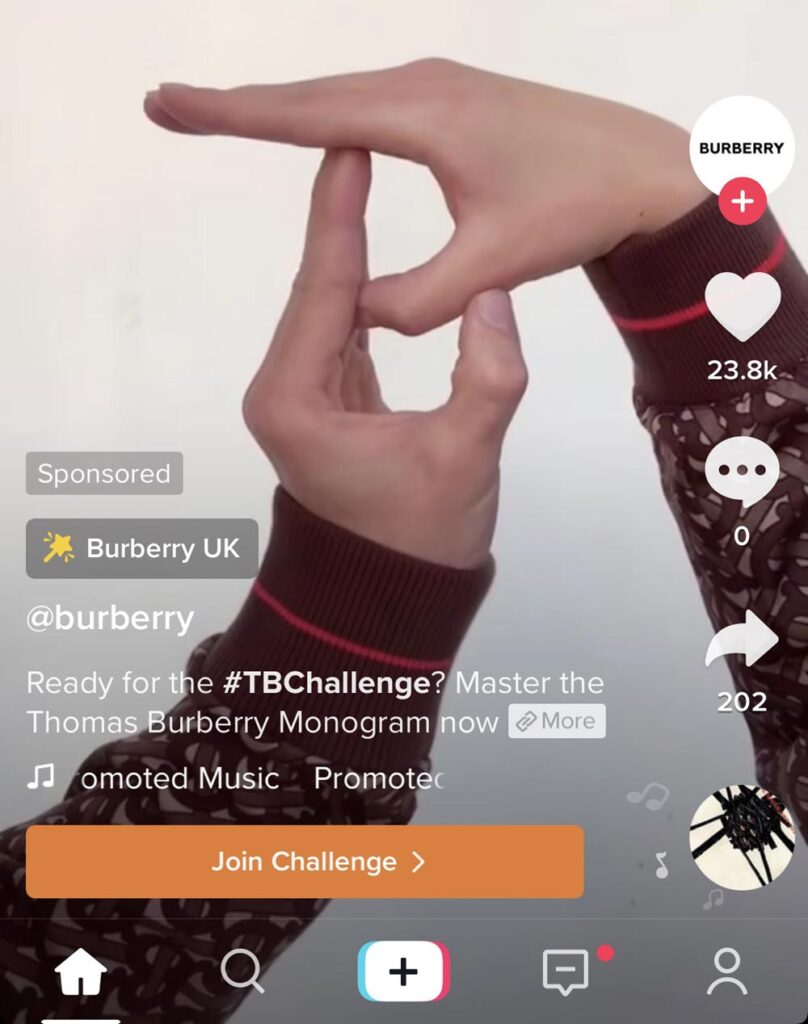 Burberry also ran a “Sponsored” ad on the platform, which invited users to “Master the Thomas Burberry Monogram Challenge”. This was part of a wider campaign which sought to involve consumers in the design of Burberry’s new logo and branding.

We also found that certain well-known brands are posting videos on the platform to focus on organic growth – such as Asos and Gymshark.

The future of Tik Tok

With donations to crowned Tik Tok content creators on the rise, we are likely to witness the emergence of a new generation of influencers with strong, loyal followings similar to the YouTube phenomenon.

The rapid growth of its user base and the appreciable amount of time users spend on the app every day are also sure signs that Tik Tok has huge potential for future growth. This accelerating rate of engagement could present great opportunities for brands wishing to reach younger audiences. Those who become early adopters of the app’s unique marketing opportunities are likely to reap considerable benefits and perhaps gain significant advantage over their competitors.